Welcome to my detailed breakdown of the new Icon Ladies Sacred Tall Boots. Now we’ve seen the Sacred Short which is this guy cut at the ankle. Really the sacred Talls can be around the hundred and fifty dollar price point and it’s going to be a nice complement to the icon bombshell boot which is the tall a bit more vampish, more aggressive boot that has a high heel on it. This is more of a touring set up. It’s a flat heel but it also has a nice style to it. I have owned a brown and a black version.

Let’s walk through the black version from a functional standpoint. They’re both going to use top-grain leather and this is more of a vintage hand so it has more that almost nubuck but it’s not quite. It’s still top-grain leather but it has that nice in between suede in between leather type feel of it. If you get into some of the details, one of the things I really like on this boot is that they put a shift pad in this. You actually have rubberized TPR that’s injected here but it’s done in a way that it’s stitched in a panel that actually kind of pokes through the top of a leather. It’s just a weird or not weird but a really neat way to incorporate that feature and still give some control for the controls on your bike for your shift pad on the left side. It’s going to be mirrored on the right from style standpoint but really the left ones the one that comes into play.

Notice the inside we have some reinforcements medially along the inside of the toe moving around to the outside. You’re going to have a second panel of leather that comes up, and the big upgrade here again over the Sacred low is you have shin protection. There’s padding there’s reinforced stitching. It has some design to it, really it’s designed to protect your shin against an impact with your foot peg and again we all know that a common injury is slipping that foot off the foot peg and getting that foot peg jammed into your shin and sometimes it ends okay and sometimes it ends terribly. Having that extra protection is going to give you a leg up on another type of boot that might be a lower cut.

The buckles on the side are adjustable but in my opinion that are a bit more stylistic. When you get into other functional elements you have this nice polyurethane heel counter with a metallic slider so you have the ability to have that heel counter to guard against crush but also give you the ability to slide if you end up on your backside shooting down the street.

Also lets move to the bottom. Notice a low profile women’s ergonomic sole so it’s cut for a women’s style foot which is typically a bit thinner than a man’s. It’s just not a smaller version of a foot of a sole. It’s actually a different ergonomically shaped sole and then it’s got a steel shank for reinforcements and I’m going to give this boot about a seven and a half or eighth on the stiffness scale. It actually was a bit stiffer than I thought it would be when I first pulled these out of the box. I’ve had some friends that have had their foot in them they said they’re reasonably comfortable, but again it’s merriment of fashion meets function.

If you’re somebody that wants to go down that road that rides every day or commutes to work or in and around town we need something that matches your outfit as well as gives you that motor protection. Looking to the inside, there’s a nice upgraded feature. You’d have a snap at the top then there is an auto locking YKK zipper. The first time we saw auto-locking YKK zippers, it was on race suits, along the cuffs. When it’s in the locked position it won’t open. When it’s in the open position it’s easy to pull down.

I’ve started to see them become a bit cheaper, as in cost, not in quality. They do come in the two colors at around 150 dollar price point. You know Icon continues to be progressive in its thinking both from a protection standpoint as well as from a style standpoint. These guys are a crossover piece and they could work well with a lot of different riding styles for a lot of different female riders. 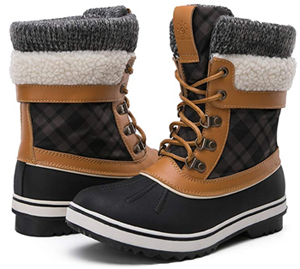 Oh yeah.. GLOBALWIN Women’s Waterproof Winter Snow Boots! How absolutely stunning is that? I couldn’t resist adding while starting to do my winter shopping. Check out details on Amazon.com